Preview Mode Links will not work in preview mode

Welcome to the People and Projects Podcast where you'll find interviews and insights on how to deliver projects and lead teams!

Premium: Follow-up to the Jim Kouzes interview on Credibility 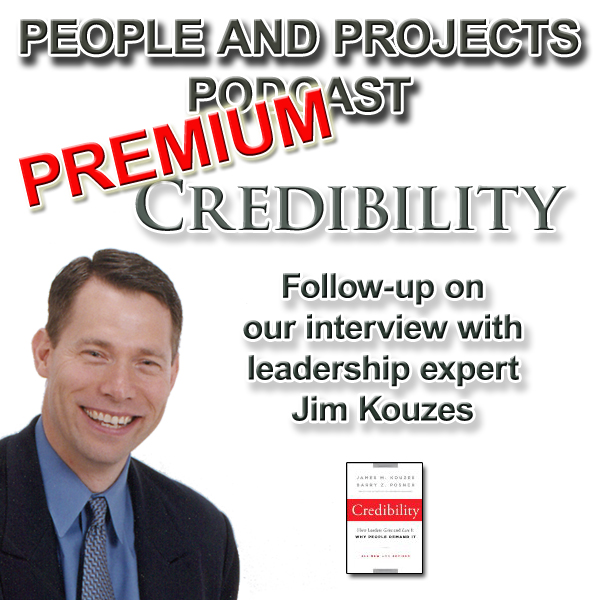 Credibility. It's the foundation of leadership. If we don't have it, we can't lead--it's as simple as that. I trust you enjoyed the discussion with Jim Kouzes.

In this premium episode I want to highlight some points from the interview about credibility.

Let's start with their definition of leadership. It seems that every one of my leadership expert guests has some slight variation to the definition, and most of these variations have some subtle benefits so let's review what Jim said. Leadership is a relationship between those who willingly follow and those who aspire to lead. What are some key words in that definition?

Relationship: it's personal, it's between individuals. As with all relationships, it has to be nurtured to be valued. Willingly follow. That's an interesting way of saying it! It's not just that they follow but that they willingly follow. You ultimately can't force your team to follow you. They have to want to. And aspiration to lead. Chances are that if you're in a leadership role, you aspired to be there. But I once tried to put a guy in a leadership role who didn't really want to lead. He didn't aspire to lead, and in the process, failed miserably. Leaders need to want to lead people who want to follow. It's a pretty good definition with key components that can remind us of what we're signing up for when we're leaders.

So what is credibility? Ultimately they say it comes down to doing what we say we will do. I'm not sure if that's what credibility is but it's a great way to create it. Looking at it conversely, it's difficult to be credible if we don't do what we say we will do. A CIO once told me and a group of aspiring leaders that one of his biggest lessons was that credibility is currency. If you want to get things done within an organization, you have to be credible. In his opinion, you develop credibility by delivering on your commitments, which is another way of doing what you say you will do.

So here's the question for us: how are we doing compared to what we're saying? Are you known within your organization for hitting your dates? Staying on budget? Following up with people? How about this: is your reputation at home as good as it is at work? Whether to your spouse, children, family, or friends: do you do what you say? Upon reflection I'm embarrassed to say that there are way too many times that I'll tell my wife that I'll do something and then I don't follow through. That's credibility. That's burning some currency. Credibility is easy to see (or not) in other people but my experience is we often don't see ourselves as clearly. We would all benefit from looking in the mirror and truly considering where we have been less faithful in doing what we say we will do.

Which brings up an interesting consideration for us: be careful what you say! Be careful about the commitments you make! I'm not suggesting that we avoid making any commitments--there's already too much of that in the workplace! But don't just casually agree to something that you cannot later deliver on. Or if you do make a commitment that cannot be delivered upon, make sure to start managing expectations earlier than later.

I have a rule of any team that I manage: I will not shoot the messenger unless it's the night before it's due--then you're dead! My point: I realize bad things happen in the real world. Tell me about them and come with a plan for dealing with them. But if you hold back information until late in the game, we have no option but to have negative impact for customers. Be careful about winging it with estimates. Be careful about compromising on scope changes. Once you've committed, you owe to yourself and your credibility to deliver so commit intentionally.

Do you remember my discussion with Jim about being liked? I'm interested in your thoughts on that. Too often we hear teaching that you cannot be a friend with those you lead. A recent Manager Tools podcast talked about that. Their point was that you can't be friends but you can be friendly with them. In typical Manager Tools fashion it took two episodes to flesh that out! But ultimately, here's my take. Remember the quote from Irwin Federman, the venture capitalist and former CFO and CEO. Irwin "contends…that all things being equal we will work harder and more effectively for people we like. And we like them in direct proportion to how they make us feel." Jim quoted research in our discussion that said if boss is a friend, the employee is 2.5 times more likely to be engaged.

Wow. I find it's less an issue of whether we're friends or not because even that can be subjective. Bob Sutton, author of Good Boss, Bad Boss says it this way. The difference between a good boss and a bad boss comes down to how people feel after an interaction. Do you have more energy or less? Do they build you up or tear you down? I like Bob's take on that. I recommend you intentionally work at building strong social bonds with your team. Don't be afraid to make it fun! Be the person who adds energy during interactions, not drains it. All of this can add to your credibility in the eyes of your team.

Do you recall Jim's references to Winston Churchill? There were two related quotes: "Part of courage is the ability to stand up and speak." Jim followed that up with Churchill's observations: "And courage is also the ability to sit down and listen." I find that some of us too often don't speak up. We assume that if the boss said it is so, well, so be it. Most of the time in the workplace we aren't being asked to support decisions that are unethical, though that can happen. But there are plenty of times we're being asked to carry the water for a decision that we don't believe is best.

I coach leaders to learn how to speak up--how to influence even though you don't have the authority. You aren't going to win every argument. Marshall Goldsmith recently recounted a lesson he learned from Peter Drucker: "Every decision is made by the person who has the power to make it: make peace with that." The point: you aren't always going to have the power to make the decision. But can you influence it? Can you shed light on some alternatives? More than I often realize we have the ability to shape decisions if we take the initiative. But it takes courage. By the way, it could be that, by discussing it, we find out that we didn't have all the facts or a full understanding. It could be that the decision was, in fact, a good one, but just not obvious until we engaged. As I mentioned to Jim in the interview, Bob Sutton's advice is wise: "Argue like you're right and listen like you're wrong!"

Credibility is a good read. In many ways it's a subset of Kouzes and Posner's larger classic: The Leadership Challenge which they have sold over 2 million copies of and are currently working on the fifth revision. If you want a good understanding of research based leadership insights, either book will serve you well.

As I move to wrapping this up, let me invite you to stop by our podcast Facebook page! I invite you to Like it and the join the discussion.

The People and Projects Podcast, where we bring interviews and insights to help you deliver projects and lead teams.